During the holidays, I promised myself that I would write about the books I gave at the end of 2008. They ranged from manga to cookbooks to hard sf to satire. I had no idea I’d get to brag so much about the books I got, too. (Spook Country needs its own post, because it’s just painfully good. It’s rare that I sit and ponder the simple beauty of a given sentence, but Gibson’s latest makes me sit up straight and pay attention like I’m back in catechism.) 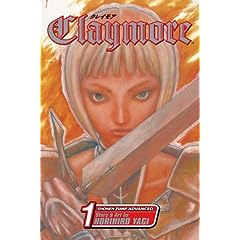 Claymore, v.1, by Norihiro Yagi This series can never get enough love, in my opinion. Not only does it refuse to pull its narrative punches, but it’s unafraid of setting genuine limits on the abilities of its central characters. Moreover, the women of Claymore never dissolve into exhausted stereotypes of either bubbly beauty or mousy intelligence. These are hard women who do a tough job for little reward, because they think it’s the right thing to do. As is the case in many professions, their greatest competition comes not from outsiders, but from within their own community. (Also, there’s a lot of truly awesome demon slaying going on.)

Super Natural Cooking, by Heidi Swanson I keep up with Heidi’s latest at 101 Cookbooks, but I’d never given her any funding in exchange for the hours of domestic and gustatory pleasure she’s given me. So when Christmas rolled around, I jumped at the chance to send this book my parents’ way, as they’re interested in learning more about whole ingredients and how to incorporate them into their daily meals. Heidi’s writing has taught me so much, and I’m sure it’ll do the same for them. (Her Thai-spiced Pumpkin Soup is so good that my friend phoned me up after surgery to tell me how much he enjoyed his care package.)

I Am America and So Can You, by Stephen Colbert et. al This one needs no explanation, save to say that I found an audio version for my parents in hopes that they might listen to it together.

Starfish, by Peter Watts Watts likes to describe himself as a curmudgeon, but he really knows the biological and psychological mechanics of how people work. (This may be why he doesn’t get along with a lot most of them.) Not only is this book assembled like a jewelry box of diamond-hard SF, but upon reading it I felt like I had met these people before. So I just had to share.

NANA, by Ai Yazawa I haven’t even read this manga, but upon reading the summary (and the numerous glowing reviews) I knew it would be the anti-Twilight that I was looking for. Besides, it has a smart girl fronting a rock band. What’s not to like?

Why We Read Fiction, by Lisa Zunshine SCIAM recently did a piece on the problems with popular evolutionary psychology, and it makes some good points. But Zunshine’s thesis — that our love of narrative stems from survival mechanisms buried deep in the brain that train us to recognize others’ motives — is compelling.

The Pro, by Garth Ennis, Amanda Conner, and Jimmy Palmiotti I got this after the holidays, and I’m sure the man at the comics shop was a little nonplussed when I insisted on buying it for my friend. It is, after all, about a super-powered prostitute. But it’s pure Ennis, and that’s never bad.

The Claus Effect, by David Nickle and Karl Schroeder It’s probably unhealthy, the crush I have on this version of Santa. But for me he’s right up there with Santa Zim from “The Most Horrible Xmas Ever.” The only thing missing is a musical number.

The Best of The Spirit, by Will Eisner One of my favourite moments this holiday season was staying up late to read this book as snow fell outside my window. The stories are so tight, so well done, and so fun to read, that I kept convincing myself that “just one more” was a great idea despite the hour. One of them, “Rat-Tat the Machine Gun,” broke my heart. It was so perfect that I had to stand up and look outside at the pink three a.m. sky and take a few steadying breaths just to steel my nerves. My holiday was richer for this book.

Feed, by MT Anderson My friend Troy sent this to me as part of a holiday care package. I’m so glad he did. This book is a direct descendant of Burgess’ work with language in A Clockwork Orange, and even when some of the science feels a little strained or isn’t explained, the perspective (that of a teenage boy torn between his innate intelligence and the sadness that threatens to overwhelm him if he contemplates his world and his place in it) makes perfect sense. There are so many little stings in this book, so many moments when the human story is dead-on, that even if you don’t read YA I advise you pick it up. And unlike much YA fare, the ending is infused with note-perfect ambiguity rather than the predictable completeness of other bildungsroman.

Spook Country, by William Gibson Say what you want about his groundbreaking cyberpunk works — this is better. The writing is as smooth and strong as spider’s silk. Each chapter is like biting down into a deep dark truffle: the bitter, powder-fine exterior, the rich innards, the knowledge that all too soon it will all end and you’ll be left only with a lingering taste of something rare and precious. I only read this book when I’m feeling kind to myself.

…Well, there it is. I’ll have to make this a tradition. I read far too few books, but I do love thinking and writing about gifts. And as has been pointed out elsewhere by finer minds than mine, the only way to help the publishing industry is to buy some books. So I encourage you all to post the same at some point.