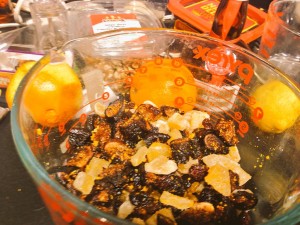 Yesterday, I made fruitcake. It was not as hard as I thought it would be. And it made my house smell amazing. You should try it, too.

Note: this is not a recipe so much as advice. Last night was also the ChiSeries Very Special Saturnalia Special, and Liana K., who was hosting the event, asked me to post this after I had tweeted photos of the process. As I told her about the substitutions I’d used to augment Alton Brown’s Free Range Fruitcake recipe, she told me I’d simply have to write this all down somewhere, so she could keep it straight.

Now, fruitcake gets a bad rap. It’s the butt of a lot of Christmas jokes. I think that puts a lot of people off it. I know I avoided it until university, when one of my closest friends had a fruitcake sent to him by his mother in a care package from Germany. It had been ordered months in advance, he told me. From an abbey. Actual nuns had made this fruitcake with their actual hands. And with the price of international freight between Frankfurt and Seattle, I figured it had to be worth it.

It was. Coated in almond frosting, delicate and golden, it tasted like Christmas. Like rum. Like cinnamon. Like vanilla. Like eggs. Like eggnog, in cake form, with juicy bursts of cherry and ginger. My one tiny slice was dense but not heavy, filling but not burdensome. “I get it,” I said. “I get fruitcake, now.”

Now you can get it, too.

Wait. That came out wrong.

If you’re skeptical about fruitcake, you don’t need order a fruitcake Eucharist from some German nuns for conversion purposes. What you need to ask yourself is this: Have I ever eaten a granola bar? With dried fruit in it? And enjoyed it? Because that’s what fruitcake is. A softer, loaf-sized granola bar. With alcohol in it. Nutrition-wise, they’re about the same. Fibre and sweetener. The explicit purpose of this cake was to preserve fruit (and colons) through the winter months, before refrigeration and globalization. Early Roman versions were essentially trail mix (pomegranate seeds, raisins, and nuts) mixed into barley mash. See? Alcoholic granola. It wasn’t until 1692, when Pope Innocent permitted the use of butter in winter fasting (in a papal memo titled, I shit you not, “The Butter Brief”), that it became more of a cake. And the candied fruit didn’t arrive on the scene until sugar started flowing from the New World. So there’s no true fruitcake. Every fruitcake you make is exactly as authentic as the next.

This is part of why Alton Brown’s recipe is great. It’s easy to understand, comes together quickly, bears plenty substitutions, and makes a good loaf-sized fruitcake. Here are some tips for making it even easier.

Buy in bulk. Sealed easy-grab packages of dried fruit and nuts are always priced at an insane markup, because they’re targeted at the convenience health food market (AKA wealthy white yuppies). So if you decide to make this cake (or to make more of them, as gifts or for an exchange), go to a store where you can buy these things in bulk. Costco, Bulk Barn, and so on. Learn from my mistake. Save your money and buy ahead of time, or wait for a sale earlier in the year. (It’s not like these things will go bad.)

Use the alcohol you have on hand. If you can put it in eggnog, you can put it in fruitcake. Brown calls for a cup of golden rum to macerate the dried fruit and dried ginger, with additional brandy to baste or spritz the cake if it dries out later. No rum? No problem! I used a mixture of Grand Marnier and Jim Beam Black Cherry Bourbon. Later, I painted it with ice cider, which is a thing we have in Canada. (Think Calvados, but sweeter.) Wondering what to do with those stray bottles of amaretto and peach schnapps? This is what you do with those. Do you have kirsch but never make Black Forest cake? Paint this with kirsch. Or Fireball. Or the blood of your enemies. Or whatever.

Use the fruit you like. Instead of measuring the berries individually, I picked up a “dried mixed berry” package (which was expensive, because antioxidants). It had cranberries, blueberries, and sultanas in it. It also added up to two cups of dried berries, which was exactly what I needed. Instead of dried apricots, I used dried mission figs. Also, I used an entire package and not a half cup. For a while, my whole house smelled of baking Fig Newtons. I don’t think I need to justify my decisions any further.

Use the nuts you like. I used half a cup of chopped pecan halves, and half a cup of chopped walnut halves. I did this mostly to boost the fat and fibre contents of the cake. I’m on a low-carb diet. (I used Bob’s Red Mill Low-Carb Baking Mix.) One of the ways to balance sugar’s effect on the bloodstream is to blend it with a lot of fat and fibre. Like nuts. Speaking of which…

Use less sugar. This recipe calls for a cup of sugar. That’s a lot of fucking sugar, for (Baby Jesus) Christ’s sake. I used about six tablespoons of honey, instead. Between the sugars in the honey, the alcohol, the apple juice, and the fruit, the cake batter tasted plenty sweet. You don’t get to complain that fruitcake is too sweet (which a lot of people do) when there’s a full cup of sugar (or more) in a 10-inch loaf pan. That’s like a tablespoon of sugar per slice. Taste the wet batter during the simmering phase and see if it really needs more.

Fresh-ground spices are for people with perfect lives. Fuck that. Use a teaspoon of ground cloves and a few gratings of nutmeg. Or neither of those things, if you hate them. (Five-spice powder or ras-al-hanout might be interesting, too.)

To frost or not to frost? A thick coating of almond cream cheese frosting makes everything better. Except your pancreas. So I will probably serve this with whipped cream.

I can’t use eggs/dairy/wheat! Try using a flax egg or other egg subsititute. Use coconut milk in place of the apple juice to boost the fat content of the cake (coconut and rum go together, anyway). Use the wheat-free baking mix of your choice (it’s fruitcake; it’s not meant to be fluffy). Fruitcake is forgiving. It’s a dense cake with a lot of bells and whistles inside it. If it dries out, baste it with more alcohol and wrap it up again.

I don’t have unsalted butter! That’s fine. Use salted butter. Just don’t add salt when the recipe calls for it. The only time you desperately need unsalted butter is when making pie crust. There, you’re done.

You’ll be fine. No, really. You will.