Did you know that Company Town has been shortlisted for CBC Books’ Canada Reads 2017? For those who aren’t familiar with it, Canada Reads is a national books competition sponsored by Canada’s public broadcaster. This year, the theme is “What is the one book that all Canadians should read right now?” First there’s a longlist of between 10-15 books, then a shortlist of five, each of which is advocated for by a Canadian celebrity. There are also public appearances and signings: I’ve been at the Ontario Library Association festival, I just wrapped up a great event in Calgary, and I’m off to Newfoundland next week. Here’s me being interviewed about the whole process, and about the book:

At the end of March, all the advocates meet together on TV and defend their choices. One book a night is voted off the island, as it were, until a champion emerges.

Yes. People will be going on national television (and radio, and the Internet) and critiquing my book, among others. Cover artist Erik Mohr suggested I have a party on the 27th, when the whole shebang starts, so that I won’t have to be alone with Twitter or the television when the book gets picked apart (and when it’s most likely to be taken out of the conversation). I’m personally really looking forward to Tamara Taylor defending the book — when we finally got to meet, we realized that we each saw a lot of ourselves in Hwa but for very different reasons. (Also Tamara is just a joy to be around, for the record.) But it might be fun to have some sort of gathering, especially since my schedule has kept me from seeing anybody but my students in weeks.

Speaking of which, have I mentioned that I’m teaching three classes, this term? That’s right, I teach from Monday-Wednesday (and some Thursdays) at OCADU and Ryerson University here in Toronto. I co-teach the Foresight Studio (graduate) course and the Atelier Design Futures (undergrad) course at OCADU, and the Creativity and Collaboration (undergrad) course at Ryerson. (Last term, I also taught the ACCIO science fiction film course for the Digital Futures Initiative programme at OCADU. It was my second time teaching the course.) I did the count, and this adds up to about a hundred students that I’m responsible for in some way.

To say I’ve been busy is an understatement. The first week of classes, I fell asleep at 7pm. When I teach I’m on my feet, walking out amongst my students: I don’t like to hide behind a podium or a set of slides. I like making eye contact, seeing what students are doodling, looking at whether they have enough water or coffee or if they can even stay awake. When I can, I also do readings like this: once I visited a classroom and just wandered between rows of desks as I read the first chapter of vN.

While this is physically exhausting, it’s also emotionally liberating. Teaching is the most hopeful activity I could be engaged in, at the moment. If you’re looking for a way to feel engaged and active in altering the course of history, there is no better method than working with students — either as a teacher, or as a volunteer at a school or a library or an after-school program. Nothing makes me feel better about the future than spending time with young people. My undergrad students are hard-working, committed, and informed. They speak the language of human rights. They’re equally conversant in gentrification and genderqueer identity. They’re actively interested in the future.

But they’re also of a generation that came of age in the shadow of multiple crises. Last year, I noticed that some of my ACCIO students openly confessed to being afraid of horror films — they had never been “allowed” to watch any, and they had phobic reactions to the prospect of watching Alien. They had never seen it before; they had only been told how scary it was. Their parents had protected them from all experiences of fear, even negotiated via the apprehension of art. Their world was scary enough: they were raised on lockdown drills and Rapiscanners and the sudden absence of full-time jobs. My freshmen students had no memory of a world before the War on Terror; war is their normal. For all the emphasis on entrepreneurialism in today’s economy, we’re not necessarily teaching students how to feel confident taking risks, taking responsibility, and making their own choices — you know, the scary shit that makes up both being an adult and an entrepreneur.

Things are different in Dubai — where I just wrapped up teaching at the Dubai Future Academy with my friend and the founder of Changeist, Scott Smith. Here’s a bit about how the project came together:

Working with the Foundation and Academy team for more than a year, Changeist conceived the Future Design program to give participants an essential, coherent, applied set of foresight tools and approaches, which participants can leverage both day-to-day and in wider strategic work. It is also structured to help them find new lenses through which to see these futures in relation to their work, and the means to communicate them through provocative experiential prototypes.

I was initially apprehensive about visiting Dubai. I was concerned about wearing or saying the wrong thing, or even bringing the wrong kind of painkillers. In truth, I needn’t have worried. It was one of the best professional experiences of my life.  I  drank four bottles of water a day, and ate broiled fish for breakfast every morning. Overwhelmingly, the welcome we received was gracious and eager, and the people we met were warm and earnest. The three most common words I heard were “God bless you.” (Even the 19-year-old at the airport checking my many boarding passes, his eyes widening in pity, said this to me.) Also, Dubai is home to the best lemonade in the world. 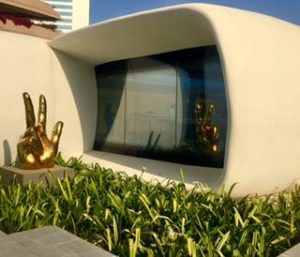 Dubai feels just like LA, but the hustle is different. It’s a place where things happen quickly, where ideas are manifested in record time. Like Hollywood, there is always a new project happening, or something in development. But there’s also a keen interest in science, technology, and the future. Not once while we were there did we hear any climate denialism. Climate change was treated like the fact that it is. Think about that. When one of the most optimistic cities on earth can accept the hard truth, it makes all other anti-science/despair-avoidant nonsense you hear elsewhere all the more disappointing.

And that’s what I’ve been up to. Now if you’ll excuse me, I have to get ready for class.