I tend not to write these, mostly because I’m absorbed in Twitter and other end of year tasks. But I realized that I actually had a novel and a couple of publicly-available short stories come out this year, instead of half-finished novels and science fiction prototypes that never travel outside a board room. (Although I did write those, too.) So, without further ado: 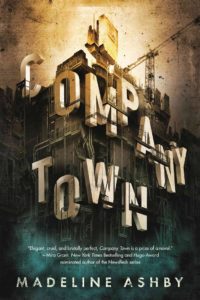 New Arcadia is a city-sized oil rig off the coast of the Canadian Maritimes, now owned by one very wealthy, powerful, byzantine family: Lynch Ltd.

Hwa is of the few people in her community (which constitutes the whole rig) to forgo bio-engineered enhancements. As such, she’s the last truly organic person left on the rig–making her doubly an outsider, as well as a neglected daughter and bodyguard extraordinaire. Still, her expertise in the arts of self-defense and her record as a fighter mean that her services are yet in high demand. When the youngest Lynch needs training and protection, the family turns to Hwa. But can even she protect against increasingly intense death threats seemingly coming from another timeline?

Meanwhile, a series of interconnected murders threatens the city’s stability and heightens the unease of a rig turning over. All signs point to a nearly invisible serial killer, but all of the murders seem to lead right back to Hwa’s front door. Company Town has never been the safest place to be–but now, the danger is personal.

A brilliant, twisted mystery, as one woman must evaluate saving the people of a town that can’t be saved, or saving herself.

If you decide to read it, I hope that you enjoy it. And even if you don’t like it well enough to recommend for anything, may I please ask that you review it? Reviews help more than you know. 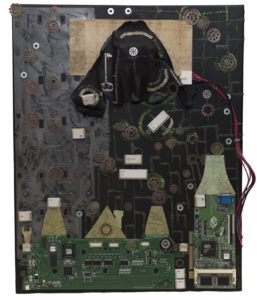 Short story:“The Dreams in the Bitch House”, Science fiction & Horror, Postscripts to Darkness, ed. Sean Moreland. This is a Lovecraft pastiche about smart homes, women in STEM, and defense contracts. Here is a snippet:

“So why do you think there are fewer women in STEM?”

This was how my admission to Aldwych House began. I’d rehearsed some answers, beforehand. I had them printed on flashcards. Actual cards with actual paper. I laminated them, trimming off every ribbon of transparent film like a jellyfish hangnail. But the moment that door opened for me — opened by itself, before I could even knock — I’d been off my game. And my sense of foreboding only grew as the lights in the hall pointed the way into the grand old sitting room where the interview now took place.

The other girls nodded to themselves under their hoods. Some of the hoods gleamed with photonic crystal thread. Others appeared to be folded from paper. In the dimness, they looked like a coven of witches. Above, I thought I saw a cherub on the embossed copper ceiling unfurl its wings and settle in, as though it too were listening to our conversation.

Short story: “Panic City,” “Cyber World: Tales of Humanity’s Tomorrow”, ed. Jason Heller & Josh Viola, Hex Publishers. This anthology was just named as one of Barnes & Noble’s “Best of 2016.” My story, “Panic City,” takes the concept of a panic room and extends it to an entire subterranean urban space. It’s in part based on this VICE piece on “luxury bomb shelters for one percenters.” It’s told from the city’s perspective. Yep. The city is the narrator.

Short story: “Thieving Magpie,” “Eclipse Phase: After the Fall”, ed. Jaym Gates, Posthuman Studios. This was seriously one of the toughest stories I’ve ever had to write. I’m not kidding. It’s also one of my most experimental. It’s weird. It unfolds like Buñuel film, or something. That’s in part because the mythology behind the Eclipse Phase game is massive, too massive to contain in a single short story. In fact, I spoke to someone who’s played the game, and he told me I was crazy for attempting to write a story about it. And so, it wound up being my first second-person short story. Technically it’s told from the same perspective, but from the eyes of multiple bodies. Also it’s a jewel heist.

Newspaper columns: I’m not sure which awards these might be eligible for, but I figure this is as good a time as any to remind you that I write  a column in the Ottawa Citizen.

Anyway, those are the pieces of mine that you can find out in the wild. Some lessons: if you ask me to be part of your anthology, I usually say yes! Anthologies are great. Anthologies give me a vision and mission. I actually like the limitations of a themed anthology. It’s sort of a MacGyver situation. Or like Chopped. I like being handed a limited set of restrictions and told to create something unexpected out of it. That’s also how my science fiction prototypes (aka foresight scenarios) work. Novels are a blank canvas. Short stories are a puzzle. It’s okay to play around with one or both or neither. My point being, I’m busy enough that I don’t write short stories on spec unless they really move me. But I can often make time to write a short story if you ask. So, you should ask!