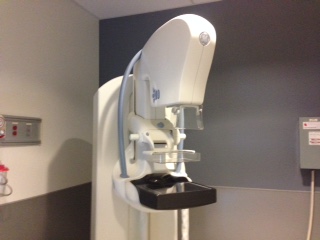 As a result of my family’s long history of cancer, I’m part of the Ontario Breast Screening Program. That means I’m eligible to receive mammograms and breast MRIs on a regular basis starting at an earlier age than most other women in Canada. It also means I’ve just had my first mammogram at the age of thirty-two.

If you’re in your early thirties, and you’re curious about mammograms, I want to tell you that they’re not scary. They don’t even hurt that much. They might, if you’re about to menstruate or just naturally have very sore, tender breasts. But generally, you’ve probably had either an inconsiderate lover who’s inadvertently done worse, or a very considerate lover who’s done exactly as requested, with similar amounts of pain either way. Like your inconsiderate lover, it also only takes about four minutes.

Of course, the pain is not what’s scary. Mostly. What’s scary is what they might find.

They first found lumps in my breasts when I was about ninteen or twenty. A doctor at a Planned Parenthood found them during an exam. She ordered an ultrasound immediately. The ultrasound was inconclusive. My mother had been diagnosed with cancer the year before. Her older sister, years earlier. Their grandmother, before I was born. Their mother was a DES user. I began to mark the time. I began to understand that I might have less of it than other people in situations similar to mine. I started to talk about “when,” not “if.”

This might sound morbid, or depressing. And maybe it was. I’m a morbid person. I know a lot of dead people. I’ve been to a lot of funerals. Unlike a lot of other futurists and science fiction writers, I believe death is a good thing. (I’m a writer. I like endings.) Understanding my own mortality streamlined my thinking. It led me to take risks, to live more daringly, to ask for more, to insist on my own happiness, to set boundaries. My grandmother died in her sixties. My mother was diagnosed before fifty. I may have only have so much time.

We all have only so much time.

Having seen cancer up close, and knowing people who live with it every day, I can tell you that dying is only one of the scary parts of cancer. There’s leaving behind your children before they’re ready. (They’re never ready. They will never be ready. Nothing you can do or say will ever make them ready.) There’s the indignity of the treatment process. The tubes and burns and bags and hair and vomit and the awful embodied-ness of it, the sudden realization that you have eaten meat your whole life and now your meat is eating you. There’s the pain. There’s the PTSD that can come with the pain. There’s the inability to work. There’s the bills. There’s the poverty that illness can bring. There’s staying alive just long enough to die eating cat food. There’s chemo brain. Having no more time to say everything and no capacity with which to say anything. That’s what I’m afraid of, anyway. All of that. But not death itself.

The mammogram (the colonoscopy, the pap smear, the skin exam) is not scary. Dying is what’s terrifying. The awful Xeno’s Paradox of it, always halfway to the end, never close enough. We spend such a long time learning how to be people and dying is the ultimate process of de-personalization, of un-personing. At the end you’re not a person any more. At the end you’re something else that you don’t know, that no one else knows, either.

I still live healthily. I go to bootcamp three times a week. I eat a diet that works for me. I take the supplements my doctor recommends. I lost about forty-five pounds this year. I feel good. I would like to live a long time, or at least as long as I can live with David. I want to be strong enough and healthy enough to look after him when his age catches up to him, which will happen before mine catches up with me. (But not, I suspect, very long before.) I don’t consider my family history to be my life’s write-off. I just know that my luck will probably run out, some day.

It was with that thought in mind that when I visited Scotland this year, I paid for a genetics test from 23andMe. In the UK, it’s still legal for the company to offer test results on things like mutations along the BRCA1 and BRCA2 genes. (In the States, the FDA has kept the company from releasing results on those tests. The test is not available over the counter in Canada.) So in my Edinburgh hotel room with my Edinburgh IP address, I registered my spitkit, filled it with spit, sealed it, and sent it from a UK post box. Last night, while writing this post, I checked my results. I don’t have the known mutations on BRCA1 or 2 that 23andMe checks for. Genetically, and within the known realm of inquiry, I have a “normal risk” for breast cancer. We raised some glasses to my health, in a friend’s backyard.

So I was mildly hungover this morning, when the hospital called.

“You had a mammogram with us,” the nurse said. “And we need you to come back for another mammogram, and an ultrasound. Can you come back tomorrow?”