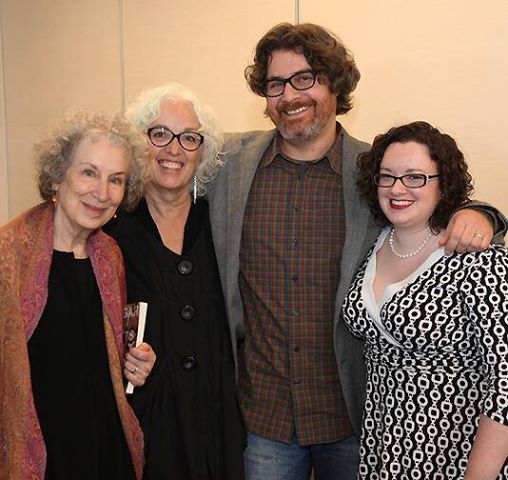 So, this happened. I went to the Kingston WritersFest, where I was on a panel with Margaret Atwood and Corey Redekop. It was a really fun panel, but I felt kind of embarrassed about how I fumbled through my reading. Also, I didn’t sell very many books. Given that my publisher helped send me there, I feel like I didn’t bear out their investment. On the other hand, I was there to represent a series of novels, one of which has a brown guy on the cover, and at Atwood’s request I read a section of the book that details blowjob technique.

Aside from feeling like I didn’t do my best, I noticed a few things about the convention. First, it wasn’t a convention, but a festival. Basically that means that there were fewer people, everybody wore blazers, and the green room had more vegetables. There was a pay-to-play aspect to the whole thing: if you wanted a ticket to a talk, you purchased one. Visitors were under no obligation to attend the whole thing. They could take in a panel or two and then venture out to Kingston and enjoy a dinner at Chez Piggy. (Chez Piggy and Pan Ancho are both excellent restaurants in Kingston, and both have meaningful, delicious options for vegetarians. If you’re a vegetarian visiting Kingston, this is where you want to go. Vegans maybe not so much, but if you’re cool with lacto-ovo you’re golden.) There was no rush to catch everything. This also meant that while there were lines, the lines were full of people who were already guaranteed a spot. Given the total public relations fuckup at WorldFantasy 2013 regarding ticketing events, I found this of interest.

The other thing I noticed was the amount of girls there with their moms. Maybe because the panel had three women (including the moderator) and only one man, more women were inclined to come. Or maybe more moms are trying to get their girls to read Atwood’s work. Or maybe those girls are more familiar with her work already, as books like The Handmaid’s Tale are pretty common on highschool reading lists in Canada. But there were a lot of kids at the festival in general, and I can see why: the festival had a whole track of programming dedicated to teens and their writing.

Workshops. For teens. More than one of them. Funny, how that draws thoughtful parents and thoughtful kids in droves. It was almost as though the festival really cared about cultivating a crop of young readers.

I have wanted to be a writer basically my whole life. (At one point when I was five I wanted to be a trapeze artist, but I’m not sure if that’s because I wanted to fly or because I wanted to spend my days in spangled leotards. We’ll never know. The next week I wanted to be a film director. That was after I saw Jaws for the first time.) To their credit, my parents never tried to dissuade me from that desire. Rather, they fed it with books and good films and opportunities: I went to theatre camp, and the PNWA Young Writers’ Camp, and I was a liturgist at my parish. Had festivals and activities like the ones in Kingston existed where I lived, they probably would have taken me. (But that would require state funding for arts programs! Heyo!) And I probably would have kept going, because parents are really interested in whatever their kid manifests and interest in, ever. Not because their kids’ interests are inherently compelling, but because it’s a thing that they’re into that doesn’t involve getting high or pregnant. Activities like that provided an irresistible lure for my parents’ wallet.

So, some thoughts for conventions that are looking to change some things:

3 thoughts on “More words about demos and cons”