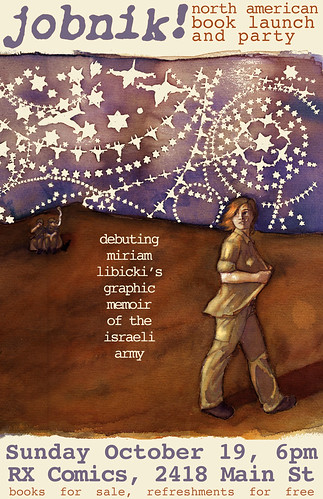 Jobnik! is an autobiographical graphic novel by my friend Miriam Libicki. It’s about Miriam’s time as an American girl in the Israeli army. Here’s the summary:

Miriam Libicki, an American-Jewish girl from a religious home, enlists in the Israeli army (IDF) in the summer of 2000, against everyone’s better judgement. Many qualities seem to make her unsuited for IDF life: her Hebrew isn’t great, she is shy and passive, and she has a tendency to fall in love with anything that moves. If that weren’t enough, the Al Aqsa uprising, a.k.a. the second Palestinian Intifada, erupts one month into her tour of duty. Will Miriam survive threats of terrorism, the rough IDF culture, and not least, her horrible taste in men?

Miriam has had no shortage of good press for Jobnik! in its single-issue form. But now, it’s available as a graphic novel with a beautiful cover, and a launch party at RX Comics in Vancouver Sunday, October 19 at 6:00pm.

I met Miriam as an undergrad, and if her obvious artistic talents and personal tenacity hadn’t swayed me into being her friend, her cooking would have. Raised Catholic, I can’t think of a sabbath-affiliated supper that I had truly relished until Miriam prepared me a Friday night kosher dinner. Say what you want about excretions and pheremones: the smell of a slowly roasting chicken, or a rising challah studded with caraway seeds, emanating from a tiny dormitory kitchen on a rainy winter’s afternoon is the scent of love, pure and simple. Miriam kneads her own dough. She rolls her own rugelach. She spends hours on her feet, measuring, massaging, perfecting.

She takes the same approach to her art.

Housed inside the body of an incredibly humble young woman is an encyclopedic knowledge of comics, manga (and especially Katsuhiro Otomo, whose influence pervades her work), kosher cooking, and the subtleties of the Israel/Palestine conflict. Our Friday night meals involved atheists, Catholics, Muslims, Jews: secular mutts who remained respectful while waiting for candles to burn down and prayers to be sang, just so we could dig our hungry little fingers into that tender, lovingly-prepared flesh and talk about the war, about Hebron, about the perils of finding a nice Jewish/Muslim/overachieving/otaku/boy/girl. (Ironically, much of that talk involved discussion of heading to Canada. Of the group crowding that fragrant kitchen, only Miriam and I have made it here. We found nice Canadian boys.)

In short, you should attend the launch. Not least because there’s going to be food. And intelligence. And art.