So, in response to reading this Buzzfeed piece about how comics pro Tony Harris hates female cosplayers — only some of them, though, which we’ll get to in a moment — I tweeted

Pro tip: geeks of all genders who are confident in their geekery and their sexuality get laid more often. Confidence is sexy. Whining isn’t.

That tweet has since been retweeted over a hundred times. It’s been favourited 20-something times. I consider that license to write a longer blog post about it. Because I was either telling people something they didn’t know, or saying something folks had been thinking for a while and keeping quiet about.

You are willing to become almost completely Naked in public, and yer either skinny( Well, some or most of you, THINK you are ) or you have Big Boobies. Notice I didnt say GREAT Boobies? You are what I refer to as “CON-HOT”. Well not by my estimation, but according to a LOT of average Comic Book Fans who either RARELY speak to, or NEVER speak to girls. Some Virgins, ALL unconfident when it comes to girls, and the ONE thing they all have in common? The are being preyed on by YOU. …YOU DONT KNOW SHIT ABOUT COMICS, BEYOND WHATEVER GOOGLE IMAGE SEARCH YOU DID TO GET REF ON THE MOST MAINSTREAM CHARACTER WITH THE MOST REVEALING COSTUME EVER. And also, if ANY of these guys that you hang on tried to talk to you out of that Con? You wouldnt give them the fucking time of day. Shut up you damned liar, no you would not. Lying, Liar Face. Yer not Comics. Your just the thing that all the Comic Book, AND mainstream press flock to at Cons.

You know what that’s code for? It’s code for: I have a deep suspicion of hot girls, because I have no power over my attraction to them, and despite my powerlessness, they never seem to sleep with me. I blame them for this, and not the stream of bullshit issuing from my own mouth. In other words, it’s whining. And whining isn’t sexy.

When women like me hear this whining, what we’re really hearing is: I have deep-seated issues with women that will become your problem if you’re foolish enough to get involved with me. Ditto some of the comments featured at Nick Mamatas’ blog regarding the misogyny directed at cosplayers:

I’m a pretty reasonable dude, but I still get a bit angry that people embraced Bay’s Transformers as much as they because I was ridiculed for liking them in grade school. I still have a little bitterness when I see 6-12 of the preppy girls I went to high school with wearing Batman costumes this past Halloween.

That’s code for: I have deep-seated issues about high school that will become your problem if you’re foolish enough to become involved with me. Getting pissed off at “preppy” girls for dressing up as the thing that you like is stupid. Here’s why: your enjoyment of something doesn’t mean that you own it. That goes for everything: JJ Abrams’ Star Trek, Spider-Man’s continuity, the Democratic Party, Gawker’s re-design, Momofuku’s noodles, whatever it is that you’re into. Just because you love it doesn’t make it yours. This truth is also something misogynists in general seem not to get. Just because women are beautiful doesn’t mean that their beauty exists to please or arouse you. You are not owed anything, or anyone. Your inability to grasp this basic fact makes you seem creepy and unattractive.

So let’s talk about people — of all genders — who aren’t creepy and unattractive. The confident ones I tweeted about.

Confidence is not arrogance. Arrogance is something you foist on other people. It usually involves talking about nothing but yourself and your accomplishments. Alternatively, it can involve talking about how your boss/friend/ex/parent hates you, and how hard done by you are, because you’re actually this innovative thinker whose thinking outside the box bothers everybody. When you hear yourself saying those things, shut the fuck up. Find another way to say it. Or just say it to the people who really do love you and will put up with your shit, because they are the only ones who care.

Confidence is not putting other people down. This includes the people you think are “fake geeks.” If someone doesn’t know the emotions each colour in the Lantern canon corresponds to, it’s not because they’re not a big enough geek. It’s because their brain is already full of information that they care about more. Like who’s really piloting Unit 01, or how the torus on the Bebop generates gravity, or how to do a whipstitch, or how to make a Raspberry Pi. In other words, stuff you might not know about. Who’s the fake geek now, jackass?

Confidence is knowing who you are and what you want, and being assertive enough to work for it while respecting others’ boundaries. Confidence is something that you project. It’s like a broadcast on your own personal frequency. People can pick up on it and listen in, or they can tune out if it’s not their thing. If they do tune out, you swallow it and move on. That refusal might be a firm and solid “No,” or it might be a gentle change of subject, or a graceful excuse for leaving the room. Letting it go is called being respectful. It’s like saying “please” or “thank you.” It’s good manners. But when people do pick up on your confidence, you’ll know. They’ll stick around. They’ll hang out. They’ll ask for your number/email/Twitter. They’ll touch your arm. They’ll get back to you. It’s like how you know you’re about to get the job. They tell you, without telling you.

Confidence is not being the best-looking person in the room. When I tweeted the original message, a couple of people told me it wasn’t that easy — after all, plenty of people feel just plain disgusted living in their own skins. And you know what? I’ve felt that way, too. In fact, I feel that way most of the time. 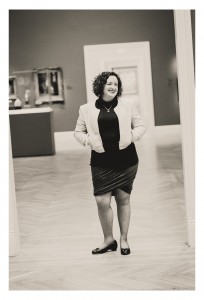 This is me. This is the most I’ve ever weighed. I hate it. (I love the picture; I hate my body in the picture.) But the thing is, I’ve never felt attractive. Not when I was 98 pounds and a size 2. Not when I had long hair. Never. Moments when I do feel attractive are consistent only in how fleeting they are. I’ve always known myself as plain at best, ugly at worst. I know I’m not “con-hot” or regular hot, or medium, or mild. I’m not skinny. I don’t have great boobies (or even big ones). I don’t have the kind of face you notice in a crowd. I believe in my unattractiveness like other people believe in guardian angels: it’s a constant force in my life that makes itself known in big and small ways. My ugliness has rarely stopped me from getting laid.

I met my first boyfriend when I had braces and acne everywhere. I insisted on sitting beside him on the bus when there were plenty of other options available, and he knew what I was doing. A week later, we were making out constantly. We stayed together for two years and sustained a friendship for years after that. This pattern has basically repeated itself over my romantic life, except for instances when I pinned my hopes on someone who couldn’t deliver. My boyfriends have all been geeks. We didn’t share exactly the same interests, or the same knowledge. That was okay. My greatest romantic successes have come as a result of my overcoming self-doubt in the pursuit of my intended.

The same goes for many of the other people I know in the geek community in Toronto or elsewhere. Sure, they’re geeky. Sure, they were made fun of for it, once upon a time. Sure, their coworkers and family might shake their heads at their hobbies. But they don’t let that rule their decisions. The word “confidence” comes from two roots, “con,” (with) and “fides,” (faith). It’s an expression of faith in yourself. Faith is already difficult to sustain, but faith in yourself is even harder, because you know all your own shortcomings better than anyone else. So no, it’s not that easy. But that’s what makes it worth it. People respect and admire confidence because it’s not easy.