Here is a look to the mobile edition, which may not work.

“Science fiction has the capability to illustrate alternative and alien subjectivities and for a lot of people – including myself – that’s by nature a feminist project.”

Ms. Ashby’s debut novel, entitled vN, came out last summer. While ostensibly sci-fi, it reads in part like a slice of real life.

“It’s about a self-replicating humanoid with a female chassis named Amy, who eats her grandmother alive at kindergarten graduation,” explains Ms. Ashby, a 30-year-old graduate of Seattle University.

“Thereafter, Amy’s on the run and she deals with a lot of things that human women have to deal with all the time: being underestimated, being groped and having to pretend like you enjoy it, and being treated like merchandise.”

This is a really proud moment, for me. I’ve never been profiled in a national print publication, and it was wonderful to have the opportunity to talk about why I choose to write what I choose to write, and how my experience of my gender informs those choices. (One answer that was cut from the interview is that I felt anxious about writing realistic female characters because for a long time, I struggled with feeling like a “real” woman.) This whole thing came out of the blue; I came home one afternoon to an email from Dierdre Kelly asking for my input. The feature is part of a series on women in science, which I strongly suggest you read.

Now, the real story is the fact that the Globe asked to interview me in my home before changing the location to a more awesome location, Bakka Phoenix Books. (Their new location is really beautiful. You should go.) What this means is that Dave and I spent some time cleaning house the preceding weekend, even though it was his birthday and Valentine’s Day. Since I couldn’t showcase the results in the interview, I thought I’d take you on a little tour. 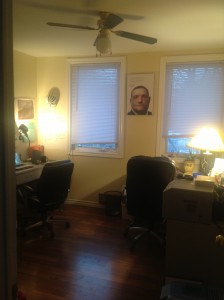 This is our office. My desk is on the left. 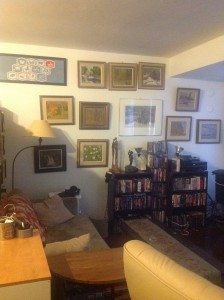 This is the other place I do most of my work — on our couch. My mom quilted that quilt. Dave’s dad painted those paintings. He also painted this painting: 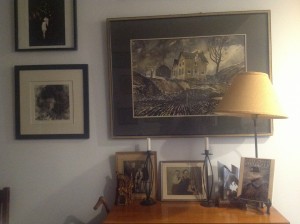 You’ll notice that everything is backward in that photo, because apparently the iPad camera (yes, yes, I know, I’m terrible) wants you to feel drunk all the time. 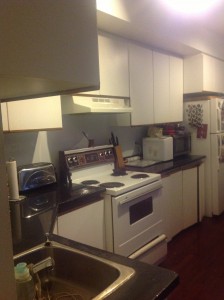 Luckily, our kitchen shares the same goal. We moved here just over a year ago after cramming ourselves into spaces that were either too small, too dark, or too damp, and I have to say I’m pleased with where we landed. It’s my first residence in Canada that has felt truly mine.

1 thought on “Look, an interview with me in the Globe and Mail!”